The Water Dragon is the main antagonist of Season 3 of Mako: Island of Secrets. It is more commonly known as The Dragon.

In A Visit From The East, the dragon appears in Shanghai, and followed the Chinese mermaid Weilan to Mako Island. During the next full moon, the dragon appears before Ondina, Mimmi, and Evie as they prepare to take part in the full moon ceremony. They attempt to fight it off with their moon rings but this proves ineffective. Before it can attack them, the dragon is distracted by a nearby boat giving the mermaids the chance they need to escape. Weilan then reveals that the dragon wiped out the entire Eastern pod and will do the same to the Mako pod as it has the power to breathe cold fire, which will make mermaids lose their tails and powers upon impact, turning them into land people. The effect is permanent and irreversible. Fortunately, the dragon can only form during the Full Moon. Zac and the mermaids then dedicate most of the season trying to figure out a way to slay the dragon but most of their attempts are not successful.

In The Puzzle Box, the mermaids attempt to enchant a puzzle box to trap the dragon, but the box sucks in Poseidon and Mrs. Trumble. Realizing the box is too dangerous, the mermaids are forced to destroy it.

In Turn the Tide, the mermaids are trained by Rita to prepare for the dragon and Veridia makes a plan to destroy the dragon by having ever mermaid in the pod fight it with their moon rings. Later, Zac comes up with his own plan to defeat the dragon. After learning of a spell Weilan can use, called Turn the Tide, that rebounds magic, Zac convinces her to teach it to him in the hopes of using it to rebound the dragon's cold fire and destroy it, believing that as a merman he can do so without fear of losing his powers. The dragon makes it's second appearance in "Way of the Dragon" where Zac confronts it alone and it chases him to the moon pool where he hopes to carry out his plan. Unfortunately, Zac finds Evie there too, who had learned what he was planning to do from Weilan, and went after Zac to try to stop him. The dragon then appears to them before Zac can send Evie off. Although Zac is able to use Turn the Tide multiple times, the dragon is completely unfazed by it's own fire breath and merely angered by this assault. As Evie attempts to help him, she is struck by the dragons fire breath causing her to lose her tail and powers while knocking her unconscious. Zac is then forced to retrieve Evie leaving himself vulnerable to the dragon. However, instead of finishing Zac off it merely sniffs him and then leaves without taking his tail too.

In Letting Go, the dragon appears a third time when Mimmi uses her moon ring out at sea in an attempt to contact her mother Nerissa, who Mimmi believes is trying to reach out to her. The dragon then chases Mimmi to a canal and frightens off Zac, Ondina, and Weilan before they can rescue her. However, the dragon leaves after merely sniffing Mimmi the same way it previously did to Zac.

In The Legend of Jiao Long, the mermaids find a potential solution to destroy the dragon when they notice a bracelet associated with the Jiao Long Dragon legend found by a famous treasure hunter named Rikki. After examining a painting that depicts the legend, Weilan notices a mermaid use the same bracelet does seemingly slay the dragon. They attempt to ask Rikki for the bracelet, but she refuses their request. They later attempt to steal the bracelet with Zac but this proves unsuccessful as well.

In Homecoming, the mermaid council announce their new plan to unleash the full power of Mako island to destroy the dragon. Later, Weilan learns an important detail about the Jiao Long Dragon legend. The dragon in the legend was actually a male human who had fallen in love with a Chinese mermaid and turned into the dragon by another pod as punishment. The mermaid then used the bracelet to break the spell and return him to normal. At the same time, Mimmi and Zac have another vision of Nerissa which causes them to conclude that the dragon they are trying to destroy is actually Nerissa under the same kind of spell. After Ondina and Weilan mange to get the bracelet, Mimmi decides to be the one to use it and they along with Zac go to face the dragon as it appears. The dragon is struck by a powerful lighting storm causing it terrible pain, seemingly starting to succeed in destroying it. Mimmi then activates the bracelet and it begins to work at both Mimmi and Zac start to feel Nerissa's presence. The dragon suddenly disappears in an explosion of sparks seemingly destroyed by the storm and Mimmi vanishes with it, much to Zac and Ondina's horror. After a moment, Mimmi emerges from the water along with a newly freed Nerissa who then shares a joyful reunion with her children.

At Rita's grotto, Nerissa reveals that she was turned into the dragon by the rebel groups mermaid Aurora who threatened the Northern and Eastern pods. She was then sent to attack the eastern pod on Aurora's orders. When the Eastern pod was defeated, Nerissa was placed in a deep sleep. When Zac and Mimmi found each other, Nerissa learned about it through a dream and was reawakened. Their love as siblings also touched Nerissa and began to break the spell and cause her true self to resurface, explaining why she did not attack Zac or Mimmi when she had the chance. Nerissa also confirms that she had followed Weilan to Mako due to her desire to see her children again, Weilan being the first thing she saw upon awakening.

The Water Dragon has the power to breathe Cold Dragon Fire, which will make a merperson lose their abilities and powers upon impact, no matter if they are native from the sea or not, ultimately turning them into human beings. The effect is permanent and irreversible. This magic also bewitches the merperson in a similar way to the Moon of Fifty Years, making them completely immune to the Metamorphosis, meaning they can never regain or become a merman or mermaid again in an active Moon Pool. There is no spell that negates the effects of both the Moon of Fifty Years or the Water Dragon's cold fire.

The Dragon is immune to the powers of Moon Rings. It can also swim at high speeds, similar to Speed-Swimming, giving it the velocity needed to chase a merperson. The Dragon's Cold Fire is the only known magic that can strip a sea-born merperson's powers and abilities, and unlike their human-turned counterparts, they're immune to the Full Moon's special events on a Moon Pool.

The Dragon only appears on the night of a Full Moon or when summoned by a Moon Ring. 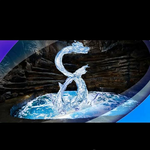 Add a photo to this gallery
Retrieved from "https://h2o.fandom.com/wiki/Water_Dragon?oldid=94291"
Community content is available under CC-BY-SA unless otherwise noted.