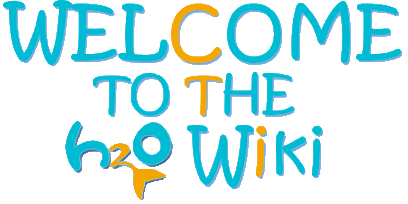 The wiki about Australian TV series H2O: Just Add Water, and it's spin-offs Mako: Island of Secrets, and H2O: Mermaid Adventures anyone can edit

Mako: Island of Secrets
Zac is a teenage boy who decides to camp on Mako Island, unaware that three mermaids, Lyla, Nixie and Sirena, who are guardians of the island, are watching him. That night, when the full moon rises, the boy comes into contact with the magic water of the Moon Pool. The following morning, Zac discovers that he has the ability to control and manipulate water. Later, after accidentally falling into the water, he finds that he has also become a merman with a fish-like tail. His new-found merman abilities will cause problems for the mermaids.

The three mermaids, curious about living on land and motivated to remove Zac's merman powers, venture onto the land and learn to live among humans.

Hi,everyone my real name is elizabeth summer and i just want to say that i absoloutly love h20 just add water it has been an inspiration although i a…

Hi, so I had some questions that I hoped could be answered by people who are fans of the show. From what I have read this series is incredibly intrug…

Helping out on the H2O Wiki

Not sure where to start?
Adding content
Talk and more...

Retrieved from "https://h2o.fandom.com/wiki/H2O_Universe_Wiki?oldid=94276"
Community content is available under CC-BY-SA unless otherwise noted.